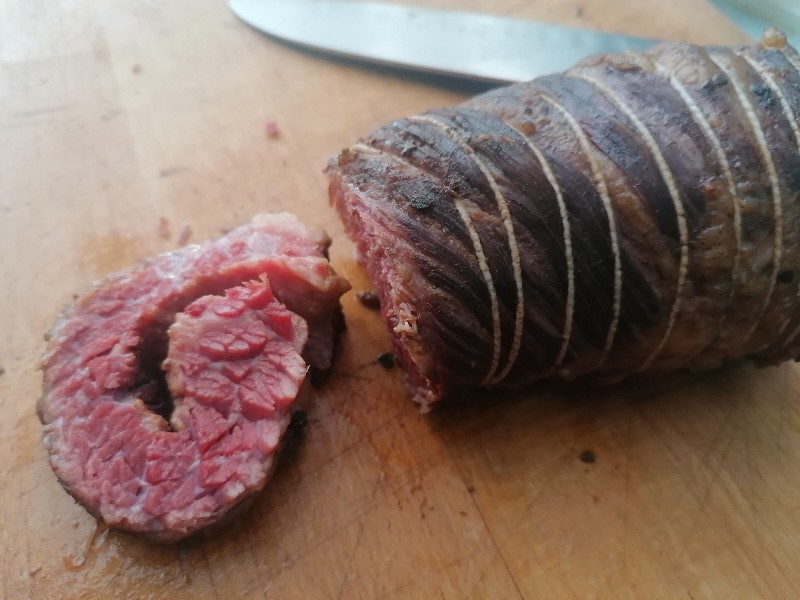 If like me you're torn between the tasty flavour of shop-bought corned beef and doubts about "OK, how exactly do they produce that...", be prepared for a double revelation. Homemade corned beef is easy, and it's even tastier!

But first, let's be clear what we're talking about. For one thing, there's no corn involved! The term "corn" comes from the large grains of salt, A.K.A. "corns" used in traditional salt beef recipes, where a cut of beef, usually brisket, is brined and cooked. Delicatessen corned beef is still usually prepped this way, albeit often on an industrial scale.

Canned corned beef, or "Bully Beef", is made from poorer cuts and scraps, cooked in (and sometimes injected with) brine, before being minced and reshaped with added nitrates. The distinctive trapezoidal can shape was designed to be easy to stack and to pack in a soldier's backpack; canned meat that needs no refrigeration or cooking is an ideal combat ration.

Making your own corned beef involves three simple steps:
1. Prepare a brine
2. Brine the meat for 7 - 10 days
3. Cook the beef

I used a piece of brisket a little under 2kg. Many recipes call for the meat to be unrolled and at least 2 inches thick; with such a relatively small piece of meat I didn't bother. Make the brine with:

Bring all these to the boil, and then cool. You could reserve half the (cold) water and boil the rest of the ingredients in the other half, making sure all the salt and sugar are dissolved, before adding the rest of the cold water to speed up the cooling process. I refrigerated the brine overnight.
**"Prague Powder" comes in two varieties, #1 and #2. #2 is used for curing meats that take weeks or months to cure. We need #1 here. The combination of salt and sodium nitrite acts as a preservative as well as flavouring the meat - it is an essential ingredient in the recipe. If you can't find it locally, you will find it online.

Put the meat in a plastic tub or some other sealable food-safe container, add the brine and refrigerate. Most recipes recommend 7-10 days, though I've seen as long as 21 days. I left mine for 10, but will try longer next time to see if it makes a difference.
Agitate the brine occasionally. I turned the meat once every day.

Finally, remove the meat from the brine, rinse under cold water and cook it. Most recipes recommend bringing it to the boil on the hob and simmering for 3 hours (assuming around 2kg of meat). Some suggest adding a little salt in the water, or beef stock, or even beer.
I used a mixture of roughly equal parts water, leftover brine, beer and beef stock. Rather than boil and simmer, I just put everything in a slow cooker for 9 hours or so. If you do the same, the liquid should come up to the top of the meat, but not totally submerge it.